We are pleased to announce that we are holding a meeting this side of Christmas for those who feel that they would like to come.

Jane Bell will be presenting:

Louise Kingcott, nee Wallis, born 1895, wrote of her growing up days in Kingston Seymour, her exodus to the Alberta Prairie, Canada, in 1922, marriage to Arthur Kingcott, their farming in such a different terrain to the farming that they had been born into in their native Somerset, and eventually their return to Ham Farm, Kingston Seymour. Jane will follow the plot through by means of a power point presentation.

Jane Bell – I only count the sunny hours

Clive Burlton – The Life and Times of Harry Dolman

Clive Burlton – A Night at the Cinema

Julian Marsh – The Life and Times of George Muller

Articles about the history of the village appear below

The Historical Society have paid for the Parish Map – which in its original cloth form is 5’6″ by 4′ –  to be photographed onto a disc which is held by the Society who have copyright.  A lower resolution copy of the map is now available for viewing here.  This cannot be zoomed into though

If you’d like your own copy of the – 30Mb – photograph (which can be zoomed), a £2 donation towards Historical Society funds will buy a copy on a disc or a copy placed onto a USB stick that you supply.  Please contact Jane Bell if you are interested. 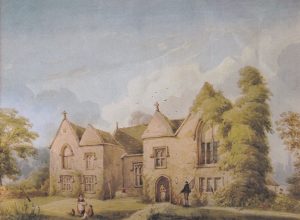 The Historical Society has purchased for the village an original water colour painting of the original Kingston Seymour Manor (of the age of Edward IV) by the artist William Walter Wheatley (1811 to 1885).

This is the original Manor House that was burnt to the ground in c1851.

Plans for the safe storage and opportunities for viewing are being considered by the Society.

It seems likely that there has been a settlement in this area since Saxon times or even earlier.  The “Exeter” Domesday Book refers to the church at “Chingestone”, but nothing remains of the Norman building except the font.  In the 12th century the Lordship of the Manor was granted to one Milo de Sancto Mauro.  One of the tombs in the churchyard, thought to date from the fifteenth century, allegedly belongs to the Bulbeck family, but the oldest surviving houses are farmhouses of up to 500 years old.

For centuries, the mainstay of the village economy was agriculture.  Until the end of the 19th century most of the land was held by a few large landowners, including the Church.  By the 1920s, however, these large landholdings had been broken up and sold to individual farmers.  The arrival of the motorway in the early 70s eased commuting as well as long-distance travel and in this decade several groups of new houses were constructed on former farmland.  However the village school had already closed (1968) and despite the new housing, the shop and original Post Office was soon to follow, although the Community Post Office opened a few years later.  The 1990s saw further house building on former farmland, as two more farms ceased business, and it was at this time that most of the remaining land within the settlement boundary was developed.  At the end of the decade the Village Hall, by then more than 25 years old, underwent major refurbishment, fitting it for the new Millennium.

Recently I was sorting out photographs for the 1914 commemorations at Yatton Chapter House and an old photograph came to some light of a First World War Soldier whose photograph came from my grandmother Louie Kingcott’s collection. 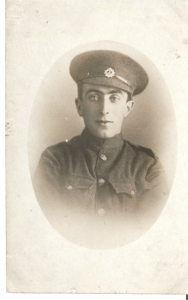 Unknown to most of us at the time, the photograph was a picture of Wilfred Pope, who lived with his family at Back Lane in one side of the Bullocks Cottages. On the back of the photograph which was not named, it said he was killed in action. I thought I would take the photograph to an Uncle of mine who just may have been able to identify it. Immediately his wife identified it for me, she told me it was Wilfred Pope and that he had been engaged to May Plaister,a relative of my uncle, whom they used to see regularly at Weston Super Mare, where she lived. When May passed away she left her photographs to my Auntie and one of them was the same photograph, this time labelled with the name on the back, also another photo of Wilfred in civilian clothes in a garden, possibly at Bullocks Cottages.

May Plaister was May nee Griffin and was brought up at Riverside Farm, Kingston Seymour, for some of her growing up days. In a transcript of a letter that May sent to her Cousin Frank Wallis in Canada dated 29th February 1956 it says that …

“These wars.  All the young men that went from here went as it was supposed to be a war to end war. What an illusion. They have gone on ever since and still are raging. I lost many cousins and a young man I was engaged to for 5 years, only 5 weeks a soldier until he was killed and my husband was a prisoner of war in Turkey for 2 and a half years and was ill for 9 years out of 10 of our married life before he died of great suffering.”

Wilfred Pope was involved in the Ypres Salient battle, a massacre, and his name is commemorated on the Menin gate at Ypres, which means that his remains were not recovered. It states “North Somerset Yeomanry” and then the list of casualties by rank. He is listed as POPE W.J.

Wilfred Pope was in the North Yeomanry Battalion of the Household Cavalry and Cavalry of the Line Regiment. He was a private, regimental number 773, and was killed in action on the 17th November 1914.

In the 1911 census he appears as working for Belle Griffin (May Griffins auntie), as an assistant at the Kingston Seymour post office.

With thanks to Ann Turner nee Wallis in Canada for helping me with this information and Lorraine and David Kingcott of Weston Super Mare. 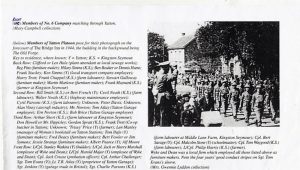 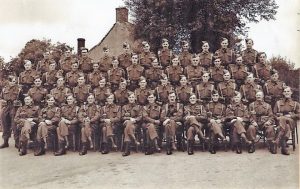 The flood of 1607 (30th January)  is generally acknowledged to have been the greatest natural disaster to affect communities along the Bristol Channel and Severn Estuary. The enduring images from the pamphlets of the day ensure that it is remembered more than 400 years later and its cause is still being debated.

Members of the Historical Society were enthralled by a talk at their March 2017 meeting given by Rose Hewlett – who is currently undertaking a research degree at the University of Bristol studying the response and recovery aspects of the event.

The storm surge affected both sides of the estuary from as far south as Barnstaple & Bideford, across to the South coast of Wales and as far inland as Gloucester.  From what records exist, many lost their lives and it seems that most of Kingston Seymour was under at least five feet of water.  The plaque inside the church doorway shows the water level reached.