In the autumn of 2010 Bob Ford and Angela Slott surveyed twenty three orchards in Kingston Seymour. 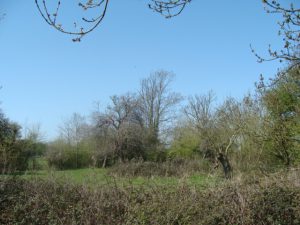 The work was carried out on behalf of the People’s Trust for Endangered species, working in collaboration with Natural England and Esmée Fairbairn Foundation, whose aim is to locate and map traditional orchards. Initially starting in 2006 within England’s main fruit growing belt, further funding was secured to extend this work to create an inventory of traditional orchards throughout England in order to maintain and preserve this unique and special habitat.

“We looked at fifteen mature or very old orchards, some had been pruned regularly and the grass mown or grazed when appropriate by sheep, cattle, poultry or bison. In some, fallen trees had been replaced by new. There were others where the trees had been neglected and the ground cover was up to our knees. Two orchards were overgrown and completely inaccessible. All are valued for their environment. Some trees had hollow trunks or limbs, very good for all sorts of nesting birds. One of my abiding memories is of Angela with tape measure and arms clasped around a tree when a Little Owl popped out of a hole just above her head. I’m not sure who was most startled, Angela or the bird. The quite rare Lesser Spotted Woodpecker also nests in hollow trees but we didn’t see one. We searched for funguses and lichens without success. We were disappointed we did not find any sign that the Noble Chafer Beetle was present. This would have been a first in Somerset. We found cracks in the bark of some trees, potential homes for many insectivores.

Occupiers mentioned twenty seven varieties of apples, far too many for me to mention all of them here. I was pleased to hear of eight Morgan Sweets, three Tom Putts, a Blenheim Orange, and an Egremont Russet. Most of the old orchards we saw were marked on the 1844 Tithe Map. They must have been replanted at least three times.

It was good to see a number of new orchards, with the ground cover mown or grazed regularly. They have a potentially productive life of forty plus years ahead of them. Here we saw many apple trees but also plum, pear, greengage, cherry, damson and walnut. The fruit from both the old and the new orchards was disposed of in a number of ways. Some were used by the occupier for cider making, cooking or eating. Many were given away. In some cases the fruit was left on the ground to be eaten by cattle or rot.

Once again our thanks to all who helped us.”