Memories of the First World War.

Recently I was sorting out photographs for the 1914 commemorations at Yatton Chapter House and an old photograph came to some light of a First World War Soldier whose photograph came from my grandmother Louie Kingcott’s collection.

Unknown to most of us at the time, the photograph was a picture of Wilfred Pope, who lived with his family at Back Lane in one side of the Bullocks Cottages. On the back of the photograph which was not named, it said he was killed in action. I thought I would take the photograph to an Uncle of mine who just may have been able to identify it. Immediately his wife identified it for me, she told me it was Wilfred Pope and that he had been engaged to May Plaister,a relative of my uncle, whom they used to see regularly at Weston Super Mare, where she lived. When May passed away she left her photographs to my Auntie and one of them was the same photograph, this time labelled with the name on the back, also another photo of Wilfred in civilian clothes in a garden, possibly at Bullocks Cottages.

May Plaister was May nee Griffin and was brought up at Riverside Farm, Kingston Seymour, for some of her growing up days. In a transcript of a letter that May sent to her Cousin Frank Wallis in Canada dated 29th February 1956 it says that …

“These wars.  All the young men that went from here went as it was supposed to be a war to end war. What an illusion. They have gone on ever since and still are raging. I lost many cousins and a young man I was engaged to for 5 years, only 5 weeks a soldier until he was killed and my husband was a prisoner of war in Turkey for 2 and a half years and was ill for 9 years out of 10 of our married life before he died of great suffering.”

Wilfred Pope was involved in the Ypres Salient battle, a massacre, and his name is commemorated on the Menin gate at Ypres, which means that his remains were not recovered. It states “North Somerset Yeomanry” and then the list of casualties by rank. He is listed as POPE W.J.

Wilfred Pope was in the North Yeomanry Battalion of the Household Cavalry and Cavalry of the Line Regiment. He was a private, regimental number 773, and was killed in action on the 17th November 1914.

In the 1911 census he appears as working for Belle Griffin (May Griffins auntie), as an assistant at the Kingston Seymour post office. 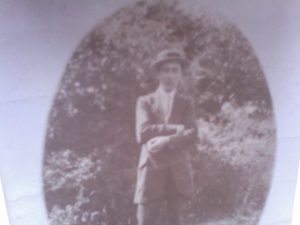 With thanks to Ann Turner nee Wallis in Canada for helping me with this information and Lorraine and David Kingcott of Weston Super Mare.